This appeared in Sunday's DNA. 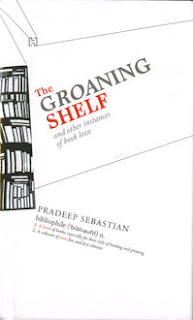 There are debates aplenty over the talents of authors, the superiority of one genre over another and the worth of awards. But when it comes to actual books themselves, all bibliophiles have the same issues. Among them, the problems of storage, the unread piles, the frustration of not getting the title one wants and the sheer joy in the tactile sensation of holding a book in one’s hands. As Louis Szathmary once said, “You want to possess the books, you want to own them, you want to hold them. Perhaps you even hope that you will read them”.
Pradeep Sebastian has been writing about these subjects and more for years; his The Groaning Shelf is a collection of journalistic sketches that have earlier appeared in The Hindu, The Deccan Herald and elsewhere. These trace, as he puts it, a lapsed reader’s journey from “bibliophile to bibliojournalist to bibliographer”.
This, then, is a book about books. It’s about shelves, libraries, borrowing and lending, first editions, and the pleasures of browsing and collecting. Clearly, Sebastian is walking in the footsteps of others who have touched upon similar themes over the years, from Walter Benjamin to Borges to Manguel to Fadiman and more, some of whom he aptly quotes to buttress his views.
Some of the best pieces here are those that deal with Indian themes, such as the meditation on Amar Chitra Katha or the decline of the hole-in-the-wall lending library. Another noteworthy piece is on how books and bookstores have featured in Hollywood over the years. There are delightful personal accounts, such as his obsessive quest to track down Ira Levin in New York, or the time he spends in antiquarian bookstores. It’s also not without a pang that one reads about his impressions of Lotus House Books, the Bandra bookshop that is still missed.
Another section deals with writers who have afforded him pleasure, such as Pico Iyer, Michael Dirda and Jasper fforde. On occasion, he quotes from his correspondence with them, nowhere more tellingly than when he mentions a letter sent to him by Nicholas Basbanes: “Because books still matter regardless of where the technology is taking us, it is worthwhile, I think, to have as many champions for them as we can muster”. However, Sebastian is no neo-Luddite: there are also well-judged pieces on the e-book versus the printed word, as well as his experiences in tracking down rare editions online.
At times, though, one feels that the volume, like an overcrowded bookshelf, suffers from excess. Some pieces deal with books and writing only tangentially, such as the one on celebrities and their privacy, For all that, Sebastian wears his learning lightly: these riffs are written in a style that is affectless but never artless. When it comes to charting the gentle madness of bibliomania, he is always entertaining, well-informed company.
Posted by Unknown at 8:48 AM