This appeared in yesterday's The Sunday Guardian 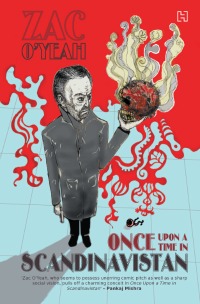 The Mediterranean is dry. Sand dunes cover most of central Europe. Tropical monsoon winds, having deserted Asia, now sweep over Nordic countries. And Sweden, along with most of the continent, has joined the Asiatic Union after the Chutney Referendum.
This is the landscape of Zac O’Yeah’s curry-drenched dystopian thriller, Once Upon A Time in Scandinavistan. On the face of it, this conceit set in the near future seems to rest on the notion of colonization in reverse; however, as the book progresses, it becomes clear that environmental depredations, and what they can do to our ways of life, are equally important.
Skip past the awful cover art, then, and meet Herman Barsk, a Swedish official working with “a professional core unit for the detection of anti-social activity” in Gautampuri, formerly known as Gothenberg. The world he inhabits is one of a “native” Europe over-run by a resurgent Asia. The streets are decrepit, beedi-smokers are everywhere, chaat and mithai shops dot the city, roads have names such as Tagore Chowk and Ambedkar Avenue, the rupee is the official currency, and the bureaucracy is in the hands of the Indian Administrative Service. Presumably, too, there are paan stains everywhere.
The grizzled, stressed-out Barsk comes across four dismembered, unidentified bodies in the tandoor of a greasy spoon known as the Tandoori Moose. His investigations into this grisly incident lead him, in ever-widening circles, to unravel the truth behind a mysterious ashram, an escorts club, the actions of a British expatriate known, not very subtly, as McGuffin and the personal lives of his colleagues – one of whom is called Salman Kitabwalla.
Along the way, Barsk has also to manage his amorous feelings for Kumkum, former Miss Bihar and current Swedish postal worker, which he does by, among other things, reading The Kama Sutra and trying to track the whereabouts of her husband. The action, as well as writing style, is suitably manic as a battered Barsk lurches from one imbroglio to another in pursuit of a woman who’s called “a blonde cannibalistic bloodsucking vampire”. Ultimately, it all comes down to a nefarious terrorist plot – with a neat inversion on our notions of contemporary terrorism.
O’Yeah creates this world painstakingly: time and again he reminds us of Barsk’s reality by piling detail upon detail. Some references are sharp, such as Ingmar Bergman being referred to as “an old native cinema director” and Thor “a long-forgotten native God”. There are others that are painful, such as a mention of Madonna becoming the UN General Secretary and Halle Berry the first woman president of the United States. (What next, Sarah Palin as best-selling author? Oh, wait, that’s already happened.) Equally, for every joke that works in the novel -- such as Kumkum referring to the poet Browning and Barsk thinking of a machine-gun -- there are others that are sophomoric, such as Maoists demanding that the India-colonised planet of Mars be renamed Maors.
While much of it is fun to read, this is a novel that clearly needed a restraining hand, the absence of which is apparent on every page. Take O’Yeah’s similes, which tend towards the bizarre. A car's engine protests “like a frog being eaten by a Frenchman”; rain falls like “hard-boiled ostrich eggs crashing out of space”; and a man threatened by a pistol makes a sound “like a lapdog falling into a cement blender”. Ouch.
When, for no apparent reason, we’re treated to a long drawn out scene of Barsk’s meeting with a film director, one C.D. Dhoti, and matinee idol Phillumappa Ishtarjee, we know that the author – in the manner of Michael Chabon in his The Yiddish Policeman’s Union – has fallen too much in love with his fictional universe to relinquish it.
Though likely to be compared with Nordic noir such as the work of Steig Larsson and Henning Mankell, this is closer in its antic spirit to the environmental thrillers of Carl Hiaasen, with his deranged characters running amok over Florida swamplands. Once Upon a Time in Scandinavistan, then, is audacious in conception and has much brio in narration. It falls, unfortunately, into the trap of believing that too much of a good thing is even better.
Posted by Unknown at 9:15 AM