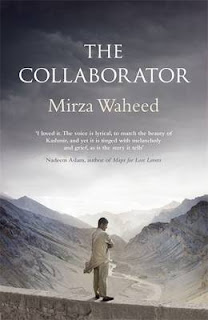 There are two ways to read Mirza Waheed’s The Collaborator. The first, as a social document throwing light on the tribulations of those in Kashmir from the early 1990s; and the second, as a novel based on the same material. The first reading yields a moving account of the brutal uprooting of a way of life with the coming of suspicion and atrocity, reminiscent of Basharat Peer’s compelling Curfewed Night. Read as a novel, however, The Collaborator is much less fulfilling.
Waheed’s debut takes us into the mind and world of a 19-year old Kashmiri narrator, son of the headman of his village on the Indian side of the Line of Control. His friends, along with most young men of the area, have fled across the border, and he continually speculates on whether they will return, whether they’re in a training camp, and whether their love of music and cricket will have been subsumed by militant activity.
The narrative circles between the narrator’s “then and now”, starting with his taking up an assignment by Captain Kadian, the area’s army officer. He’s told to venture into disputed territory, count the bodies of those shot while crossing over, and recover ID cards, arms and ammunition. Though horrified by this task, he carries it out with regularity, and Waheed provides nightmarish descriptions of the slaughter encountered as the narrator wonders who he has become: “The armed caretaker of the unknown dead, the chowkidar of my own dead ilk, the sole witness to a machine of carnage or a shameless forager of friends’ remains, a petty ID-card thief, or the grim reaper?”
The contrast between an Edenic time spent with friends and the hellish present is brought out time and again; this is a novel painted in Manichean black-and-white. As a result, characterisation suffers -- Captain Kadian, in particular, is a caricature of a hard-drinking, abuse-spewing army man. Then, there’s the all-too-common problem of the Sagging Middle: between the set-up and the drawn-out denouement, there are many passages that impede momentum. There’s even an unconvincing, half-hearted love interest.  Waheed’s prose is charged and urgent, but often becomes overwrought, sometimes stressing the obvious: “Among other things, the Line of Control also curtailed bonding of the blood, prevented contact between brothers and sisters, mothers and daughters, fathers and sons, as if it were a sin.”
Where The Collaborator scores, however, is in its descriptions of the village’s daily activities that are so rudely sundered by searches, interrogations and curfews. In Waheed’s hands, many such scenes are made resonant. Take this one, for example: “What the papers said was entirely different from the evening Doordarshan news that Baba and I watched on our wood-encased, shuttered Weston TV, so I always waited for the papers, which sometimes took all day to get to us, or just tuned in, with Baba again, to the crackling BBC news on his leather-bound Philips Jai Jawan transistor.” There are other well-rendered episodes too, such as the traumatic account of the torture and subsequent fate of the elder brother of one of the village youths who has gone missing.
A challenging, but necessary, task when composing a novel based on incidents that one is close to is to step back and disengage in order to successfully reshape and fictionalise the material. Especially so if the incidents happen to be harrowing. This is a hurdle that The Collector doesn’t quite overcome; yet, it deserves to be read as an on-ground account of what the people of Kashmir have gone through.
Posted by Unknown at 10:40 AM