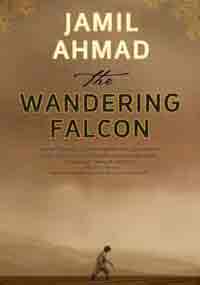 It was Kipling who was largely responsible for the myth-making about the clans of what was known as the North-west Frontier. His tales and poems of men who would be kings, Pashtun traders and barrack-room ballads spread the legend of time-trapped tribes who were noble and fierce, enmeshed in a matrix of honour that they were prepared to defend to the bitter end.
Echoes of this are to be found in 78-year-old Jamil Ahmad’s debut novel, The Wandering Falcon. The setting of his book, identified on the first page, is largely the “tangle of crumbling, weather-beaten and broken hills, where the borders of Iran, Pakistan and Afghanistan meet”. The novel comprises a series of episodes dealing with the tribulations of nomadic tribes who inhabit this inhospitable terrain, covering a period after the departure of colonial powers and before the rise of the Taliban.
Nominally, this is the story of the coming of age of Tor Baz, the wandering falcon of the title. He appears, sometimes in little more than a walk-on part, in almost every one of these nine tales: first, as abandoned infant, then as a boy passing from tribe to tribe, as a witness and observer, and finally as an informer and guide to the region.
The circumstances of his birth are narrated in the brutal, somewhat over-determined events of the first story. The child of an alliance brutally torn apart by an honour killing, he is almost left to the mercy of the elements. As he comes to manhood, however, he adapts and thrives in a hostile environment. He’s something of a cipher, though; there’s little, barring revelations of shrewdness and cheerful amorality towards the end, of Tor Baz’s own feelings. His character, then, is something of a peg to hold the individual episodes together.
The other characters who inhabit The Wandering Falcon range from cataract-afflicted tribal leaders to peripatetic, tricky mullahs to women losing control over their fates in an environment in which they are little more than chattel. The author’s aim is not to vilify or to defend, but simply to portray, although there is clear sympathy in his depiction of tribes forced to abandon their grazing grounds because of passport controls and border checkposts. The old, however settled, gives way to the new and Ahmad contrasts “settled life as opposed to nomadic life, and the writ of the state as opposed to nomadic discipline”.
The prose is bleached-bone clean, sometimes rising to the level of stark poetry: “Where the fields end, the convolutions and whorls of bare, cruel rock once again resume their march across the land – occasionally throwing up spires and lances of granite into the sky”. (Some of these  passages, in fact, make the book sound like a blanched, distant cousin of Cormac McCarthy’s novels of ranchers and cowboys adrift on American borders, grimly facing bleak landscapes and changing times.) The dialogue, though, can sometimes be arch and folksy: “Wailing in a man is like honey in a pot. As honey attracts flies, so does wailing attract trouble”. More echoes of Kipling to be discerned there.
Clearly, Ahmad has spent time in close quarters with the people he writes about. There are knowledgeable details of daily life, customs and terrain, in all their cruel as well as hospitable aspects. Once in a while, there’s bitterness at an acknowledgement of the outside world: “No politician risked imprisonment: they would continue to talk of the rights of the individual, the dignity of man, the exploitation of the poor, but they would not expose the wrong being done outside their front door”. That sounds familiar.
“To live outside the law,” Bob Dylan famously sang in Absolutely Sweet Marie, “you must be honest”. The Wandering Falcon relates, with honesty and grace, chronicles of those who live outside national laws, gazing upon the twilight of their anachronistic codes of conduct.
Posted by Unknown at 9:26 AM