This appeared in today's The Hindustan Times. 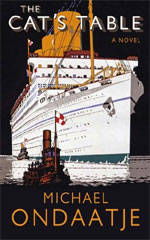 An 11-year-old boy named Michael, “green as he could be about the world“, climbs aboard “the first and only ship of his life”. Michael Ondaatje’s lyrical The Cat’s Table starts with this embarkation, and though one is tempted to think of the novel as a personal account, the author takes pains to point out in an afterword that though it “sometimes uses the colouring and location of memoir and autobiography”, it is indeed a work of fiction.  (Bear in mind, though, that the narrator’s nickname is Mynah: “an unofficial bird, and unreliable, its voice not fully trustworthy in spite of the range”.)
It’s a 21-day journey, from Colombo to London in the 1950s, undertaken by the protagonist to meet his mother. The cat’s table of the title is the least privileged place on board – as opposed to the captain’s table – and it is here that Michael strikes up a relationship with two other boys, the quiet Ramadhin and the studious Cassius.
As the vessel embarks upon a “slow waltz” to its destination, Ondaatje gives us pen portraits of the others on board, seen through the eyes of the fascinated, wide-eyed Michael:  gentle bridge players, intense musicians, energetic roller-skating Australians, knowledgeable botanists, rich entrepreneurs and suave thieves, among others. As we’re told: “...we came to understand that small and important thing, that our lives could be large with interesting strangers who would pass us without any personal involvement.”
There’s also a prisoner on board, and his actions and relationships – echoing into later years -- provide a skein of plot to a novel that is otherwise an evocatory record of a voyage that leaves an indelible mark on Michael’s mind.
The three boys get to know every inch of the ship, “bursting all over the place like freed mercury”.  Much of the novel progresses via effective set pieces, such as the passengers’ attempts to watch a movie on board as the storm progresses, or Michael and his cohorts lashing themselves onto the deck to face the onslaught of the storm itself, or a vivid account of a night journey through the Suez Canal. Ondaatje frequently makes use of telling detail, especially when it comes to the differences in social class or living conditions of those on board; this both tempers his lyricism and prevents the nostalgic journey from foundering on the reefs of the maudlin.
Some of Ondaatje’s earlier works, poetic though they may have been, have been marred by obliqueness and too-frequent spatial and temporal shifts. In The Cat’s Table, too, there are detours into the lives of the protagonists in later years: in particular, describing the fate of the weak-hearted Ramadhin and his life as a tutor in London, as well as the narrator's relationship with his sister. However, the overall tone of wistful remembrance and clear focus on the antics of those on board, holds the novel together, giving the whole an elegiac glow.
Towards the end, however, Ondaatje delves into fragments of other lives, such as that of a mysterious circus girl, detailing her background and relationship with the ship’s prisoner. This weakens the narrative, for what makes the book magical -- the boy's mediating consciousness -- is lost.
At one point in the novel, the narrator, as a grown-up, visits an art exhibition by Cassius, who has gone on to become a well-regarded artist. Here, he sees a painterly record of Cassius’s memories of that earlier journey along the Suez Canal. The Cat’s Table is the novelistic equivalent of those canvases, a sequence of impressionistic vignettes of a voyage enlivened by a capacity for wonder.
Posted by Unknown at 11:44 AM