An Existential Laurel And Hardy

This appeared in today's The Indian Express. 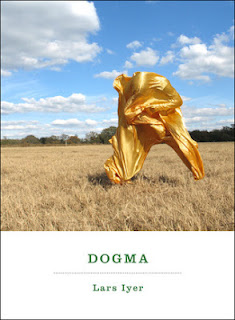 In his recent “literary manifesto after the end of literature and manifestos”,  the Danish-Indian academic Lars Iyer asserted that literature nowadays was no more than a pantomime, and a tired one at that. He called upon writers to “resist closed forms”, to “mark the absence of Hope, of Belief, of Commitments, of high-flown Seriousness” as well as a sense of imposture. “The end is nigh,” he concluded. “The party’s over.”

All of this – along with a vein of dark comedy – was much in evidence in Iyer’s first novel, Spurious (though traditionalists would say it was more a series of linked blog posts than an actual novel). Spurious introduced to the world a pair of bumbling academics, the first one named Lars, the second, simply W. Philosophers manqué, a pair of Brods without a Kafka, they made their way through a universe facing “end times”, with the hapless Lars being grandly insulted and upstaged by W. at every opportunity.

The pair returns in Iyer’s new work, Dogma, with W. still firmly convinced that the end is nigh: “Our end or the end of the world?” “Both!” Happily, his insults are as Falstaffian as ever. He asserts that if he’s a Socrates, Lars is “a Diogenes gone mad”, exhorting him time and again, as the policeman tells the lost wayfarer in the Kafka story, to “give it up!” W. is also compelled to make fun of Lars’ Hindu heritage, including one memorable occasion when, referring to a statue of Nataraja, he mocks his luckless confrère: “What's your cosmic dance like? It's the funky chicken, isn't it?”

Dogma is virtually without plot, but in the course of its pages, the two embark upon a lecture tour of the United States, visiting, among other places, Nashville and Memphis, which of course brings about much mock-philosophizing by W. Not that all of this is without insight, such as the statement that “capitalism is the evil twin of true religion”. At other times, there’s laughter from the abyss: “Philosophy is like an unrequited love affair. You get nothing back; there’s only longing, inadequacy, a life unfulfilled”.

Abandoning their dream to “live on the fruits of America”, the gin-quaffing team returns home, W. to Plymouth, Lars to Newcastle, where the latter discovers an infestation of rats – a slightly forced continuation of the situation in Spurious, where his walls were  beset by mysterious  (and symbolic) damp and fungus. Nothing deterred, Lars and W. conceive of their own dogma for presentations, inspired by filmmaker Lars von Trier’s Dogme95 movement. With these two, however, the dogma is simply an excuse to make up rules as they go along, with no ripples being created in the world they seek to influence.

Soon, W. finds that his academic career in jeopardy and, like a Continental philosopher’s version of Laurel and Hardy, or even an updated, garrulous version of Vladimir and Estragon, the two stagger through life as if in an “eternal waiting room”, sometimes sinking into nihilism: “Every day is only the fresh ruination of any project we might give ourselves…What have we learnt except that we have no contribution to make, nothing to say, nothing to write, and that we have long since been outflanked by the world, overtaken by it, beaten half to death by it?”

Dogma, then, is a snap of the fingers in the faces of those still under the spell of traditional novelistic forms. As for Lars and W., there’s another book on the way charting their further exploits. They can’t go on, they’ll go on.
Posted by Unknown at 10:35 AM