My column for the Sunday Guardian.

On a recent two-week work trip, the Kindle resolved at least one dilemma: that of how many books to take along.  It was, in any case, stuffed with new e-books I hadn’t begun, innumerable samples of others, and recent issues of a few periodicals. More than enough. But because old habits die hard, I also carried some paperbacks: John Lanchester’s Fragrant Harbour (as it was set in the city I was going to be in); Heinrich Boll’s The Lost Honour of Katharina Blum (which I needed to re-read in order to write last week’s column); and Anne Enright’s The Forgotten Waltz (which I’d been putting off reading for some time).

Much to my surprise, I finished the Lanchester and the Boll, as well as new issues of the London Review of Books and the NYRB -- and downloaded Pankaj Mishra’s new book before departure, making inroads into it on the flight back. This is quite unusual: before most trips, for work or otherwise, I spend more time deciding what books to take along than actually reading them, and return with almost all unread. It’s not that I don’t feel the need to read when away from home – it’s more to do with being able to devote more time to reading when in familiar surroundings. This time around it was different, probably because I was away for longer than usual. 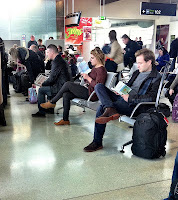 Reading while waiting for a flight at an airport is another skill I have yet to master. Walking up to the flight gate and spotting others immersed in paperbacks or e-books causes a twinge of envy. I’m more likely to seek something fattening to eat, or to wander around the bookstore looking for more to add to the unread pile. And every time there’s an illegible announcement on the PA system, I imagine it’s to inform me that my flight is either delayed or on the verge of taking off.

It’s better once I’m on board; after all, what else is there to do during a flight, especially if you’re travelling alone? Watching movies on that little screen has never been very satisfying, and as for the food, the less said the better. Although on one flight, when I was immersed in the Kindle -- after they’d announced that it was OK for electronic devices to be switched on – a passing attendant raised her eyebrows and asked me to turn it off. (Perhaps she’d assumed it was a giant phone?) When I indicated that the wireless wasn’t on, her eyebrows shot up further, so I hastily went ahead and turned the device off, anyway. Visions of being handcuffed to my seat without any reading matter had arisen before my eyes.

Back home, I still have on the bookshelves a bulky, yellowing paperback edition of Lawrence Durrell’s The Alexandria Quartet, which has been my companion on at least three journeys so far.  However, I’ve only managed to read the first few paragraphs of Justine, the initial volume; in fact, I’ve started the page over so many times that I can offhand recall portions such as “the thrilling flush of wind”, “sky of hot nude pearl” and “I have escaped to this island with a few books and the child – Melissa’s child”. It’s a great opening which promises much, but so far I haven’t been able to go further, distracted every time by thoughts such as: “Should I turn down the air-conditioning? Should I go outdoors and explore instead of lying here reading? Is this pillow too soft? Should I turn up the air-conditioning?”

Too much of this, and I achieve the state captured in a quote attributed to baseball player Satchel Paige: “Sometimes I sit and think and sometimes I just sit”. After which, I just sleep. Now that it’s Durrell’s centenary year, I’m firmly resolved to finish the tetralogy before December. If I manage to regulate the temperature, that is.
Posted by Unknown at 9:34 AM

I read the Alexandria Quartet a few months ago (loved it!) and all because of your tweet pointing to the Jan Morris article