This appeared in today's Indian Express.

LINCOLN IN THE BARDO George Saunders 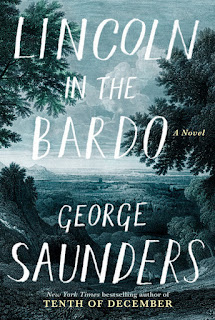 In the old witticism about the power of belief, scientists assert that according to the laws of aerodynamics, the bumblebee’s body isn’t designed for flight. Being unaware of this, the bumblebee goes ahead and flies anyway. Similarly, the elements of George Saunders’s first novel, Lincoln in the Bardo, don’t appear to be designed for take-off -- but it goes ahead and soars anyway.

It was to be expected that the tone and manner of the novel would be as distinctive and quirky as Saunders’s acclaimed short stories. However, the strangeness quotient here is of a different order altogether.

The Lincoln of the title doesn’t refer to the 16th President of the United States, but to his third son, William. And the bardo doesn’t refer to the pronunciation of a French actress’s last name, but to the Tibetan Buddhist concept of an intermediate state between two lives. It is in this purgatory-like realm that the novel is set.

The seeds of Lincoln in the Bardo are historical, arising from the President’s prolonged grief at 11-year-old William’s untimely death in 1862, even as American troops engage in a bloody civil war. In Saunders’s telling, a disoriented William finds himself in the bardo, surrounded by others who are similarly awaiting their ultimate end.

The narration largely consists of an idiosyncratic mélange of voices belonging to Willie and his cohorts, as they journey towards an understanding of their state and ponder on questions of leaving behind and letting go. Some bent double, some horizontal, some on all fours, some nude, some etiolated, some mutilated, in ways that mirror their lives and deaths, confined within their memories, dreams and reflections, they speculate, gossip and chatter about the goings-on in the eerie zone they inhabit. Every once in a while, they hear a “familiar, yet always bonechilling, firesound associated with the matter-lightblooming phenomenon” marking the departure of “sick-forms” from this limbo of  “serendipitous mass co-habitation”.

This defiantly odd playscript-like pattern is interspersed by another collage of voices drawn from historical records: letters, memoirs and reports, sometimes in agreement and sometimes contradicting each other. These deal with associated subjects such as Lincoln’s presidential ball while his son was ill, and the state of the family after the child’s demise. Thus, in this string of 108 bead-like chapters, otherworldly voices are balanced by voices that are only too human.

Given that the backdrop is drawn from Tibetan Buddhism, there’s very little philosophising, even though at one point some of the characters engage in a brief discussion on destiny and free will, and, a little later, one is told that “whatever way one took in this world, one must try and remember that all were suffering”. Which is why, “though on the surface it seemed every person was different, this was not true”. (He tells the truth, but tells it slant, as the poet from Amherst put it.)

All of this may make Lincoln in the Bardo sound forbidding, if not unmanageable; yet, one learns to navigate and relish this long, strange trip of the grateful dead remarkably soon. There’s weirdness on this journey, but there’s also wit, pathos and redemption.