The A-Z Of Christopher Hitchens

This is the first version of a review I did for DNA, the more 'conventional' form of which you can read here. 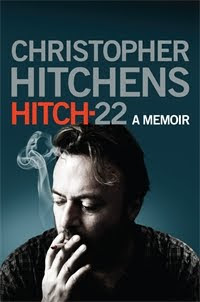 As the index to this journalist, author and polemicist’s memoirs is crammed with people and places from recent times, here’s a return of favour.
Amis, Martin. One of Hitchens’ closest friends, whom he met while at Oxford. In Amis’ memoir, Experience, there’s an account of the trip both of them undertook to visit Saul Bellow; here, Hitchens’ provides his own version, filling out the details.
Balliol College, Oxford. Where Hitchens first flirted with and then committed to the Trotskyite Left. There are thus many passages of meetings with and activities of the International Socialists. Oh, and he also recalls homosexual dalliances with, among others, unnamed future members of Thatcher’s cabinet
Citizenship. After living with a US green card for over two decades, Hitchens finally received full American citizenship. This, it would appear, only strengthened his zeal to defend most of that country’s overseas incursions. With a new convert’s enthusiasm, he takes a few paragraphs to describe his passport.
Doubles.  Hitch-22 refers to the author’s ability to lead two lives: for example his initial commitment to workers’ causes combined with long, drunken lunches in Notting Hill. As he writes: “What I hope to do now is give some idea of what it is like to fight on two fronts at once, to try and keep opposing ideas alive in the same mind, even occasionally to show two faces at the same time”
Elsinore Vacillation, The. What Rushdie came up with in place of Hamlet when asked to devise Ludlum-like titles for Shakespeare’s plays.
Friday lunches. Hitchens recreates the goings-on at these now legendary 80s sessions, weekly gatherings of, among others, Amis, James Fenton, McEwan, Rushdie and Clive James. Not all come across as engaging: as he says, you had to be there.
God is Not Great. His earlier book supporting atheism, mentioned here to affirm that he hasn’t changed his mind.
Habits. He may give the impression that his life is all alcohol, friends and travel, but he’s a very hard worker: “On average I produce at least a thousand words of printable copy every day, and sometimes more. I have never missed a deadline. I give a class or a lecture or a seminar perhaps four times a month and have never been late for an engagement”.
Iraq. His visit here made him conclude that Saddam Hussein was a menace -- to put it mildly -- and he charts his final break with the Left over his support for the second Gulf War.
Jewishness. Hitchens records the revelation that his mother was of Jewish descent, and his researches into his family tree. Though he supports Israel’s right to exist, he’s critical of its expansionism.
Knowledge. With a skilled journalist’s legerdemain, Hitchens leaps from literary associations to eras, people and events throughout.
Left Movement. In his early years, Hitchens was a firm believer. The events of 9/11 caused a turnaround; he went from, as one critic puts it, “British Trotskyite to American neo-con sidekick”.
Mawkishness. Something Hitchens comes very close to when describing the life of an American soldier killed in Iraq.
Name-dropping. Hitchens seems keen to claim acquaintance with practically everyone who matters; indeed the expression “my dear friend” appears too many times to count.
Outspokenness. Bluntness has always been a part of the Hitchens persona, and he doesn’t disappoint: the Nobel Prize is “a huge bore and fraud”; “I neither know nor care anything about sports”; Cuban socialism “was too much like a boarding school in one way and too much like a church in another”.
Ps and Qs. Hitchens is not one to mind them, taking potshots, sometimes peevishly, at those such as Gore Vidal whom he once lionized then fell out with.
Rushdie, Salman. Another of Hitchens’ close friends, to whose defense he sprang after the fatwa. His reactions to this edict: “In the hate column: dictatorship, religion, stupidity, demagogy, censorship, bullying and intimidation. In the love column: literature, irony, humour, the individual, and the defense of free expression.”
Self-esteem. Not something that’s in short supply; he even refers to himself as “not all that bad-looking” when in school.
Travels. Beirut, Greece, Portugal, Algeria, Cyprus, Argentina, Cuba, Poland and more:
Hitchens has visited all of these countries, learning, debating, and arguing along the way.
United States of America. In his words, a “celebrity-making machine”, and his adopted country.
Voluminous. His style can be prolix, not to mention allusive, as though the pen is hurrying to put onto paper all that his mind teems with.
Words. When dealing with a schoolyard bully, Hitchens discovered that these can be weapons; moreover, “if you can give a decent speech in public or cut any kind of figure on the podium, then you need never dine or sleep alone.”
X ray. He has a strong urge to dissect and get to the bottom of issues, not willing to be led by popular sentiment.
Yvonne. The author’s mother, who tragically committed suicide and who said, “If there is an upper class in this country, Christopher is going to be in it”. Some of the warmest passages of the book revolve around her: “She was the cream in the Campari, the offer of wine or champagne instead of beer, the laugh in the face of bores or purse-mouths and skinflints, the insurance against bigots and prudes”
Zeal. Whatever else you may say about him, there’s no denying that he pours himself into anything he likes, and marshals all arguments possible against what he doesn't.
Posted by Unknown at 11:52 AM