The Thousand Details Of David Mitchell 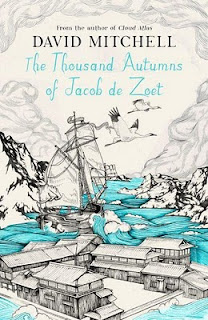 The human brain, it’s believed, processes only a fraction of what’s out there in the ‘real’ world. With his fifth novel, The Thousand Autumns of Jacob De Zoet, David Mitchell demands that we widen the frame and absorb as much as possible about the period and place the book is set in – a corner of Japan towards the end of the Edo era in the 18th century.
It’s clear from the first few pages itself that a vast amount of research has gone into the novel, revealing itself in details of clothes, interiors, patterns of speech, food and, of course, the shifting political compulsions of the time. That, however, can be a two-edged Bushido blade. While this saga of administrators of the Dutch East India Company and their dealings with a walled-off Japan has more than enough thrilling incident to keep one reading, the forest of narrative does at times get obscured by the trees of detail.
The Thousand Autumns of Jacob De Zoet concerns itself with the travails of its eponymous hero, a Dutch clerk who arrives on Dejima, an island linked to Nagasaki. This is where the Dutch East India Company has been allowed to establish a trading post, contact with the mainland being forbidden. The green-eyed, red-haired pastor’s son hopes to make his fortune in order to return to Holland and win the hand of his beloved there.
The book moves at a cracking pace from the start. Dutch officials – some corrupt, some upright – walk through its pages, each one as garrulous as the other. They’re matched by Japanese interpreters, magistrates and abbots, some valiant, some seduced by power.
Almost at first sight, Joseph loses his heart to Orita Aibagawa, midwife and assistant to a Dutch doctor, and much comedy accompanies the course of his hesitant wooing, including the unexpected administration of an enema. The things men do to pursue matters of the heart.
When not having his extremities assaulted, Jacob pores over ledgers of those before him, who have been busy swindling the company in order to sell the excess for tidy sums. No surprises there: the esteemed officers of the East India Company were not above the same feat.
In these and other actions, Jacob reveals himself to be both clever and upright, although unaware of the effects his actions have on others. As the chief resident puts it, he’s “an honest soul in a human swamp of back-stabbers, a sharp quill amongst blunt nibs...”
The mood of the book becomes grimmer in the next section, where the setting moves to a monastery in Japan that is beset by sinister goings-on involving young women, largely due to a nefarious abbot. Orita finds herself sequestered within its walls and plans an escape while contemplating her sorry future if she doesn’t. Once more, the book segues away in its next section to display the consequences of the weakening of Dutch colonial power and the rise of the English. The island comes under siege, and Jacob and his compatriots deal with the outcome in this “land of a thousand autumns”.
The prose has an air of living immediacy because it unfurls in the present tense and -- in a first for Mitchell -- in the third person (which, as he’s put it, is the art of “He, She and They”). Paragraphs are often short, at times single sentences, which add pace and throw the occasional metaphor into relief: “The clock's pendulum scrapes at time like a sexton's shovel”.
At times, though, the twists and turns veer towards the lurid. This creates a dissonance with the texture of the narrative, crammed as it is with specifics and particulars. Take for example, a missive from the Shogun: we're told, in succeeding paragraphs, that it's a scroll in a cylinder emblazoned with hollyhock insignia on a lacquered tray, needs a clockwise twist to open, and the parchment within is wound tight around two dowels of cherry wood, with ornate columns of brush-stroked calligraphy. Some letter, that.
Those who seek the writer of Ghostwritten or Cloud Atlas won’t find him here; neither is this novel akin to his last work, the semi-autobiographical Black Swan Green. Instead, the protean, gifted Mitchell explores the effects of the opening up of a hitherto-closed society to outsiders who may not always have its best interests at heart. Interpreters from both sides struggle to find the mot juste, and the Japanese grudgingly embrace the advantages of European medicine and science. Orita herself is a midwife – a word pregnant with meaning in this context – and much of the novel’s action takes place on the island of Dejima, quite literally a bridge between two cultures.
At one point in the novel, Orita equates narrative with other necessities: “The belly craves food, the tongue craves water, the heart craves love and the mind craves stories”. The exuberance of the storytelling on display here does more than satisfy that craving.
Posted by Unknown at 10:06 AM