According to a recent report in AdAge, an international airline is planning to “curate” a series of books for passengers so that they will be able to finish reading them just as their planes touch down. Each one will last only for the duration of one of the airline's routes. "According to our literary friends at Hachette, the average reader consumes between 200 and 300 words per minute," the head of the airline’s agency is quoted as saying. "For the longer flights, we accommodated some napping time and meals." 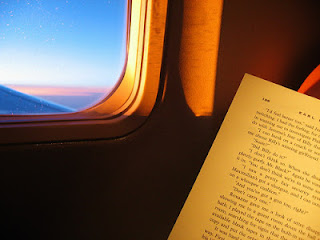 G'day, mates! This is your captain speaking. Welcome aboard. On your right, you can see the Harbour Bridge, and on your left, you’ll see a small pile of paperbacks. I know you’re used to reading books only on screens, but here, as a treat, is the real thing. Go on, pick up any one of them. Flash them for snob appeal the same way you do your chunky fountain pens and LPs.

Not to worry, the plane’s on autopilot, so I can ramble on for a bit. You don’t mind, do you? Good on yer. Well, even if you do mind, there’s little you can do about it, heh-heh. Just joking. No, I haven’t been sampling the Shiraz.

Checking out the books? You’ll find something for every taste. All you Wall Street tycoons can curl up with the financial thriller in which a young man armed with a management degree foils dastardly deeds planned by the Occupy Movement. Software tycoons: for you there’s the saga of a couple who rent out their garage to programmers working on the next big thing, only to find that they’re ripping off Apple devices instead. And for the women -- hello, ladies! -- there’s the heartwarming story of Sheryl Sandberg’s live-in maids and how they’re the power behind her throne.

The special thing about these books is that we've designed them to be just the right length. Start now and you’ll finish as you land. It’s six hours till we touch down, and according to our research the average reader consumes about 200 words per minute. Mates, I’m not suggesting that any of you are average, but still, that’s the only metric we have at present. So: 360 minutes would mean 72, 000 words. Whoa, I can hear you say, that sounds like a lot! But hold on a bit, you blokes.

On flights like these, we’ve noticed that you like to nap for an hour. So we told our talented writers to cut off 12,000 words; they're a fair dinkum lot. Then, of course, you’d need an hour at the very least to do justice to our fine wines and comestibles. That’s another 12,000 words gone.

Restroom breaks? No worries: take half-an-hour. Lop off another 6,000 words.

That’s not all. Stretching and strolling down the aisle to check on the status of co-passengers: 45 minutes. Take off another 9,000 words. Then again, should you be seated next to an attractive co-passenger, fumbling attempts at conversation would take, say, an hour. That’s another 12,000 words gone. Should you happen to be the attractive co-passenger in question, the same applies, as it’s difficult to read with someone burbling in your ear.

Further, you do need to listen to our in-flight announcements and safety procedures. That’s 45 minutes. We’ve also made allowances for those who conduct conversations in loud voices as well as children who are less than well behaved. These distractions shouldn’t occupy more than another 45 minutes.  Which means, as we’ve instructed our willing writers, another 18,000 words gone.

Let’s see, have we left anything out? Well, we’ll give you a little free time, because a part of flying is also, as we’ve observed, simply moving about in your seat trying to get comfortable. Let's take 3,000 – or make it 2,950 – off.

That leaves us with 50 well-chosen words. Read them right now, so you can sit back and enjoy the in-flight movie.
Posted by Unknown at 8:16 AM