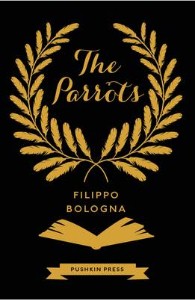 “The book of my enemy has been remaindered,” Clive James once wrote, going on to end his ditty with: “And I rejoice”. Literary schadenfreude – and envy, the other side of the coin – shows up every once in a while in fiction too, with books about novelists struggling to write, brooding over the success of others and letting rip on the publishing industry. There was Martin Amis’s The Information, for example, which dealt with a middle-aged writer consumed with plotting the downfall of another. More recently, in Howard Jacobson’s Zoo Time, a writer rants over the state of the novel, of publishing and the bestseller list. (Nice to see that novelists, like the rest of us, aren’t immune to water-cooler bluster about colleagues and the work they do.)

The latest addition to this subgenre is Filippo Bologna’s The Parrots, ably translated from the Italian by Howard Curtis. A satirical take on writing and publishing that often enters the realm of farce, The Parrots is about three writers – simply called The Beginner, the Writer and the Master – vying for a prestigious literary award. Representing stages of a writing career, the three of them variously brood, connive and fret over which one is going to win.

Bologna’s writing style is dry, detached and omniscient, cutting between events in the lives of the writers, pronouncing on their past, present and future and dwelling on their petty stratagems, spoils and skeletons in closets. “In Rome strange things happen that can only be explained by the fact that they are strange and happen in Rome,” is a typical example of his sardonic take, as is his definition of a bunch of flowers: “Pointless, wonderful, scented tributes to human frailty”.

While he reserves his bile largely for the state of his fictional novelists and their discontents, Bologna isn’t above taking swipes at other aspects of the writing industry. Literary blogs, for example, are places where “all the losers who can’t get their books onto bookshelves badmouth each other and which are the equivalent of a soya beefsteak for a carnivore forced to subsist on a vegetarian diet”. Ouch. Parodying the way books are described, he has a publisher comment: “Yours is a very special book, almost a kind of prose poem, with an epigrammatic, fragmentary quality that somehow magically recreates unity”. Elsewhere, the fashion for providing a long list of acknowledgements in a novel is compared to the end credits of a Hollywood film. It’s a point of view you could call jaundiced had it not been for the fact that Bologna is clearly having a lot of fun pricking inflated literary balloons.

Delightful as much of this is to read – Bologna takes careful and considered aim at his targets and their peccadilloes – as The Parrots progresses, one can’t help but note that, on many occasions, the twists and turns of a somewhat implausible plot bring the pleasure down a notch. (Even Google Street View has a small part to play in one such turnaround.) Rants, after all, are much more fun when they’re loose and unstructured. Many times, though, this pays off – in a richly farcical and very funny scene, the Master, who, like Nathan Zuckerman has been diagnosed with a prostate problem, is left with no choice but to read out a section from a medical diary containing the time and frequency of his urination to an audience expecting to be regaled by a poem. All goes well, however: the Master’s reading is described as “an attempt to convey the tragic nature of existence, in a classical form invigorated by postmodernism, which recovers and recycles heterogeneous material”. (Thomas Bernhard, who himself ranted at literary awards in his My Prizes, would have grinned.)

In a week in which literary news has been dominated by the announcement of the Man Booker longlist and the reactions to it, reading Bologna’s The Parrots is a palate-cleanser of sorts: a reminder that though such prizes certainly have their uses, to treat them as the be-all and end-all of artistic merit would be a mistake.
Posted by Unknown at 9:12 AM