Father, Sons And Everything In Between


“Fathers start as gods and end as myths and in between whatever human form they take can be calamitous for their sons.” That’s a sentiment explored in many works of fiction, from Turgenev’s Fathers and Sons to Hemingway’s short story of the same title down to Siddhartha Deb’s The Point of Return – to mention just a handful from an ocean of stories. This is the theme that David Gilbert also takes up in & Sons, his ingenious new novel from which the quotation at the start of this paragraph is taken. 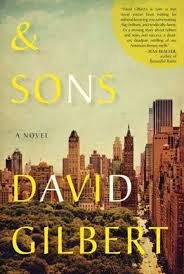 The father in question is A.N. Dyer, a Salinger-like novelist who, now that he’s approaching 80, calls his sons home for a reunion. There’s Richard, a drug counsellor and aspiring scriptwriter in Los Angeles; Jamie, a maverick filmmaker in Vermont; and Andy, who’s much the youngest at 17, being born when his father was in his early sixties. A.N. Dyer’s first novel, Ampersand (yes, Gilbert’s title is very clever), was a critical and commercial success: “It seems to me,” a character says,  “you have Catcher in the Rye people and you have Ampersand people…To me Salinger is a stray dog you want to adopt, but A.N. Dyer is a different beast altogether”. The beast in question went on to write more than a dozen other novels, the last published ten years ago; now, shaken by the death of his childhood friend Charles Henry Topping, he tells his sons: “You should know my goal as a father – and I swear this is true – my goal was positively Hippocratic, to do no harm, and look where that got me. You could sue for malpractice. I am a reckless scalpel.”

This makes the novel sound like a study of writing and the family – but it’s a lot more. Too much more, in fact.  It begins and ends with a funeral, and is narrated by one of Topping’s sons, a character who, we soon realise, is making up much of the actions and thoughts of the rest. Throughout, first person swoops into third and then back again, in a wily feat of legerdemain. Gilbert's capacious act of imagination, then, is itself structured as an act of imagination. "I have always had an unfortunate tendency to spin myself into alternate universes," the narrator says, later spelling it out: “Maybe I was imagining myself as a ghost, invisible in this world, trying to understand the family I would haunt for the rest of my life.”

Then, there’s much space devoted to sending up different cultures – aspiring moviemakers on the West Coast and the shenanigans of high society in NYC's Upper East Side, for example, or the glittering set piece revolving around a high-profile book launch party, peppered with metaphors drawn from the solar system. (There’s an abundance of metaphors in the book, some delightfully apt, others stretched too far.) Further, Dyer’s revelation about the birth of his youngest son halfway through the novel is quite at odds with the rest: “How could anyone believe this nonsense?” the narrator confesses. “It seemed something concocted by Pynchon doing his best impersonation of Barthelme.”

To further gild the lily, Gilbert includes text messages, extracts from novels, e-mails and letters. Various tonalities blend together, sometimes uneasily, to create a work that sprawls more than it should.

Fortunately, there are rewards for persevering with & Sons. Gilbert’s prose is, for the most part, a worthy handmaid of his ambition, and can be supple and sinuous, mimicking the registers of thought. It can also sometimes capture characters in a sentence; here, for example, is Topping on his father: "He grew up shy, then aloof, then distant, his feelings best relinquished from the palm of his hand – a firm grope, a pat on the back, a semi-ironic salute."


Inside every fat person, it's nastily been said, is a thin one struggling to get out. You could say the same of many novels, and Gilbert's & Sons, with all its meretricious charms, would have been the better for being slimmer.
Posted by Unknown at 8:48 AM