A Portuguese Sends A Postcard Home


Those who continually claim that the novel is dead are simply those who have closed their eyes to its potential. It remains unmatched as a form to, among other things, ask questions that have no neat answers and explore how we react to changes. Importantly it’s also a vessel for linguistic experiment. Alas, too few novelists nowadays attempt to take advantage of these possibilities. 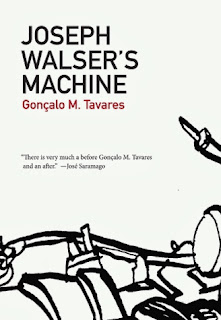 The Portuguese writer Gonçalo M. Tavares isn't among them, as his four-novel Kingdom cycle amply reveals. These novels are loosely linked by overlapping characters, themes and a prose style that depends on defamiliarisation – almost as though a Martian was sending a postcard home from Earth, to borrow from Craig Raine. Such boldness and versatility has earned the young writer a clutch of awards as well as encomiums from other novelists. After he won the Jose Saramago Prize for writers under 35, the author after whom the prize is named commented, “In thirty years’ time, if not before, Tavares will win the Nobel Prize, and I’m sure my prediction will come true... Tavares has no right to be writing so well at the age of 35. One feels like punching him.”

The punch delivered by one of the novels in the Kingdom series, Joseph Walser’s Machine, is a good example of Tavares’s style, which has been called that of "alienated recognition" by one critic. Set in an unnamed European city, the novel follows the fortunes of Joseph Walser, an unassuming factory worker. Tavares delves into the symbiotic relationship between Walser and his shopfloor machine, riffing on the differences between the human and the mechanical and “the swiftness with which [machines] transform causes and necessities into beneficial effects”. Chaplin’s Modern Times was a comment on the mechanization of labour; Tavares takes this a step further to expose our double-edged dependence on means of production, making a distinction between things crafted by the hand and those created by the mind.

The novel now starts to fill in more details of its protagonist’s life and world. His wife is having an affair with his philosophical and garrulous factory overseer, and this personal invasion is matched by an invasion of the city itself: a war is underway and citizens live under occupation. These events too, as translator Rhett McNeill points out in his introduction, are described “as if they were occurring for the first time, divorced from both their historical resonances and their usual linguistic milieus”. This leads to several penetrating observations. “To be a patriot in peacetime is to be a coward, because it’s too easy,” writes Tavares, and then again, in a statement that echoes the rhythms of his prose: “Every man in time of war, individually, on his own, founded, as it were, a Ministry of Normality, which established, essentially, repetitions. Because only repetitions…allowed each individual to wake up to find themselves human the next day.” People make history, but history also makes people.

For a novel that’s so short, there’s a lot that Tavares manages to pack in, and this without making the whole appear inordinately rushed.  Allied to the Janus-faced nature of machines and the citizen’s experience in times of war is the role and nature of unpredictability and choice. This is brought out in scenes where Walser engages in games of dice with his friends who are later to rage against the war machine. “There were six numbers stuck to the die and they weren’t going anywhere,” Walser thinks. “It was this precision that excited him, this precision that was well-defined by immutable limits that, nonetheless, allowed room for his peculiar decisions.”

History and morality, unpredictability and determinism, people and objects: these, then, are the axes around which Joseph Walser’s Machine swiftly rotates. Large themes indeed, but Tavares demonstrates the skill and insight to do justice to them. One of his earlier novels is entitled Learning to Pray in the Age of Technique – and that’s not a bad way to think of this one, too.
Posted by Unknown at 9:03 AM