In Defence Of Eloquence

This appeared in today's Sunday Guardian.


Apart from the larger issues that have come to the fore during the Tehelka imbroglio, the many e-mails in public have thrown light on our reactions to the way words are used. Tejpal's style in these exchanges – “penance that lacerates”, “adamantine feminist-principle insistence”, “light-hearted banter” -- has been much mocked and seen as an attempt to obfuscate, not illuminate. In contrast, the woman journalist's responses have been clear and consistent, not to mention courageous.

Such suspicion of high-flown language isn't new. Plato was famously skeptical of sophistry and rhetoric, with Aristotle defining the latter as a set of skills that would enable one to persuade people of a given argument. From the Puritans on, the land of the free and home of the brave has favoured a plain style with succinct, declarative sentences, something upheld and championed by the influential Strunk and White. In England, George Orwell was one of many over the years who called for short words and unadorned diction; as he put it, “good prose is like a window pane”. Many contemporary writers, from Naipaul to Hemingway to Carver have followed suit, though in their own distinctive manner. (This is not to suggest that writing clear prose is a simple matter; arranging words to make them mean exactly what you want them to mean can be fiendishly difficult, whatever the style.)

In e-mails, official correspondence and other such communication, it's unarguable that the simpler the better, without the pollution of jargon and unnecessary legalese. With other forms of writing -- fiction and verse, for example -- it's not as obvious. While one clearly isn't advocating mendacity, if we all switch to such straightforwardness, we lose much of the beauty that language is capable of. 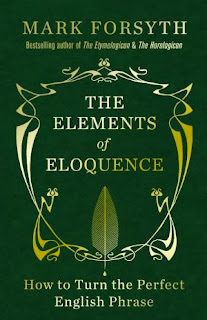 In his recent The Elements of Eloquence, Mark Forsyth joins those who have pointed out how Shakespeare used the art of rhetoric to give his plays so much of their power. Calling him “the master of the memorable line” Forsyth goes on to demonstrate this by many examples. To mention just a few, there’s alliteration (“Full fathom five thy father lies”), pleonasm (“To be or not to be, that is the question”) and aposiopesis ("No, you unnatural hags/I will have such revenge on you both/That all the world shall…”).

Forsyth also illustrates how “the techniques for making a single phrase striking and memorable just by altering the wording” have helped many other writers (not to mention songwriters and copywriters). Oscar Wilde was a master of antitheses, for example: “The well-bred contradict other people. The wise contradict themselves”. P.G. Wodehouse was known for his transferred epithets: “His eyes widened and an astonished piece of toast fell from his grasp”. T.S. Eliot did the same thing: “In a mere three lines of ‘Prufrock’ retreats mutter, nights are restless, hotels are one-night”. Moreover, “in Dickens' strange mind, mists were lazy, houses crazy, and snowflakes went into mourning and wore black".

Forsyth’s engaging examples to do with rhetoric apart, the firmament of contemporary fiction -- as I've written earlier -- is studded with literary stars for whom plain and simple just wasn’t enough. Nabokov is one of the more distinctive prose stylists, and his heirs are many, from Martin Amis to Will Self. Most Irish writers are possessed of the same sensibility: John Banville for one. Another John, John Updike, once described his style as "an attempt to give the mundane its beautiful due".

As Forsyth says towards the end of his book, by using more than one rhetorical figure: “I hope I have dispelled the bleak and imbecilic idea that the aim of writing is to express yourself clearly in plain, simple English using as few words as possible. This is a fiction, a fib, a fallacy, a fantasy and a falsehood. To write for mere utility is as foolish as to dress for mere utility.” That may be carrying things too far, but the writers who view the elements of language as musical notes that make sentences dance are well worth paying attention to. On that point, I'm adamantine.
Posted by Unknown at 8:55 AM

If only I could haul every person who has ever given me grief over my eloquence and force them to read this. And if only I could believe it would change the way they think. Nevertheless, thank you for making this point.

Yes, it's a pity eloquence is suspect nowadays. Thanks for reading.