A CASE OF EXPLODING MANGOES Mohammed Hanif
After coming out of the shadows of magic realism, it looks like we’ve returned to the penumbra of those talented Latin American writers. Dark political satires and fables are the order of the day: there was Mohsin Hamid’s The Reluctant Fundamentalist; there was Aravind Adiga’s The White Tiger; and now, there’s Mohammed Hanif’s A Case of Exploding Mangoes.

This one owes as much to Marquez’s Chronicle of a Death Foretold as it does to Vargas Llosa’s The Feast of the Goat -- something acknowledged in the book by having one character read the Marquez novel, and many characters feast on the aforesaid animal.

A Case of Exploding Mangoes tells of the time before and immediately after 17 August 1988, the day General Zia-ul-haq perished in a plane crash along with senior generals and the ambassador to , among others. The truth behind that incident has never been plausibly revealed, and it is this ambiguity that Hanif takes as the subject of his debut.

The first strand of the novel tells of the fate of Junior Under Officer Ali Shigri of the , who lands in hot water because of what he’s concealing – or not – when it comes to the disappearance of a fellow cadet. The other strand presents us with the last days in the life of General Zia who, in Hanif’s hands, emerges as a vain, blundering, occasionally cuckolded, fearful and Koran-consulting despot -- a man who, among other things, is troubled by an infestation of tapeworms in his gut.

It emerges that Ali Shigri may well have his own reasons to do away with the Chief Martial Law Administrator, but this isn’t the only threat to the General’s life. There are also conniving generals and curse-carrying crows, apart from the fleshy fruit of the title. Thus we shift from scene to scene, from air force training camp to the Presidential palace to prisons under Lahore Fort to the American embassy.

Much of this is great fun to read, even though you occasionally wince at Hanif’s barbed satire. As with the protagonist of Hamid’s The Reluctant Fundamentalist, Shigri’s voice is likeable and effectively maintained throughout: it is cynical, scoffing and baffled by turn. Quite a few aspects of life under military rule come under Hanif’s scanner and he treats each one sardonically, occasionally reminding one of Heller’s Catch 22. Few targets are spared: a brigadier thinks that Jinnah looks like “a tortured eighteenth-century chemist on the verge of a new discovery” and a bearded character named “OBL” turns up to hobnob with Pakistani and American top brass at a Fourth of July party.

However, Hanif’s penchant for overarching satire means that the work falters somewhat as a novel. The identifying and skewering of targets takes precedence over sustenance of pace and depth of character. (Much the same can be said of that other recent satirical work, Adiga’s The White Tiger.)

Be that as it may, the prime merit of A Case of Exploding Mangoes could well be to remind us once more that one of the functions of artists and their work, from the time of Juvenal, is to mock the petty pomposities of those in power. On that score, this is a novel to relish.

The alkaloid that seduced Baudelaire and a subsequent generation of Romantic poets was also the dirty little secret at the heart of ’s Indian empire. Profits accruing from the trade in opium derived from Indian poppy fields gave rise to powerful dynasties, glittering palaces and unjust wars, and it is this that animates Amitav Ghosh’s , the first novel in a proposed trilogy.

As is his wont, Ghosh weaves together the separate destinies of disparate characters; from these interactions arise the pressure points of plot. There’s Zachary, a principled mulatto freedman from Baltimore; Deeti, an impecunious widow fleeing the depredations that follow her husband’s death in an opium factory; Neel Rattan, a fastidious Bengal potentate convicted of forgery; Paulette, a recently-orphaned and headstrong young European; and Baboo Nob Kissin, an agent for indentured labourers, in the midst of a transformation wrought by a relative-turned-goddess.

It is 1838; the Opium Wars are about to begin; and all of these, with a colourful supporting cast of lascars, labourers and overlords, find themselves on board the Ibis, a “topsail schooner” that sets sail from Calcutta across the kala pani to Mauritius.

The novel isn’t just a seafaring yarn from first to last. Ghosh takes his time in building up the characters, filling in their backgrounds and the circumstances leading to their current predicament. In characteristically limpid prose and with the eye of a social anthropologist – a discipline in which he’s well-versed – he details the customs, diet, clothes and social restrictions of these individuals who are to be thrown together on the Ibis to become “jahaj-bhais”.

As is the case with other novels of the sea by Conrad, Melville, and more recently Unsworth, there is much nautical terminology. We’re introduced to tween decks, foretopmen and ratlines, with sailors eating hardtack and playing ablewhackets while – heaven forbid – the jib and the martingale run afoul of the dolphin-striker. Most of this builds verisimilitude (along with other striking passages that tell of the intricacies of poppy cultivation and the inner workings of an opium factory) but it is Ghosh’s use of polyglot dialogue that takes us into choppy waters. The he attempts to construct teeters under its own weight. Among other volumes, he’s obviously studied his Hobson Jobson obsessively for characters such as Mr Doughty, the ship’s pilot, spout Anglo-Indian dialect to the point of absurdity: “Where’s the mate? Has he been given the kubber that my bunder-boat has lagowed...Hop to it before I give your ganders a taste of my lattee.” (You just know that before too long, this man is going to ask for a “brandy-pawnee”.) The lascars on board the Ibis, too, have their own argot: “Catchi too muchi shamshoo. More better go sleep chop-chop.” And the turn of phrase employed by Baboo Nob Kissen puts one in mind of Hurree Jamset Ram Singh, Billy Bunter’s schoolmate.

Not to sound tendentious, but when so much patois is stuffed into so few sentences, it makes characters teeter dangerously close to caricature. Elsewhere, when characters speak in their non-English native tongue (such as Bhojpuri) Ghosh uses the more agreeable expedient of reporting their dialogue in English, without the use of quotation marks and with the occasional vernacular expression thrown in for good measure.

Unfortunately, the streak of latter-day Romanticism prevalent in Ghosh’s The Glass Palace and The Hungry Tide resurfaces again here, leading him to imbue some of the characters with an exaggerated sense of idealism and occasional naiveté. This is the case especially with Paulette, and with others such as Jodu, her childhood friend. Allied to this are moments tinged with melodrama involving those on the other side of the fence -- principally sadistic or insensitive Englishmen such as Mr Burnham, the Ibis’ owner, whose pastimes include filching property and being spanked. Such juxtapositions at times approach the level of the simplistic.

Despite this, the novel never comes across as slick or pat, a testimony to Ghosh’s way with narrative. He doesn’t let scholarship come in the way of storytelling, and his fascination for describing lives uprooted by history is evident. It’s not all smooth sailing, then, on this , but it’s a voyage of many charms.

This is from the latest TimeOut Mumbai.

GUARDIAN OF THE DAWN Richard Zimler

A novel set against the Portuguese Inquisition in in the 16th century? Sounds fascinating. Alas, in Guardian of the Dawn, Richard Zimler takes this premise and turns it into an overly solemn and often portentous work.

The novel narrates the fate of Tiago, brought up by his Portuguese-Jewish father in the princely state of Bijapur, his Indian mother having died in his infancy. Others in Tiago’s orbit include his high-strung sister Sofia, his loving cook Nupi, his enigmatic adopted cousin Wadi and his gentle wife Tejal. Tiago is imprisoned and tortured by zealous officials of the Inquisition and the story moves from present to past as he recalls his childhood and the circumstances that have led him to his current predicament.

Years later when he is finally free, Tiago makes plans to identify the shadowy individual who incriminated him, and take his revenge. This is when, all of a sudden, the novel’s tone and pace shifts to become a tale of behind-the-scenes machinations and bloody murder, a la Othello (Tiago, Iago, get it?).

Notwithstanding some scenes of great vividness – such as the sentencing and punishment of alleged heretics – Zimler’s prose is often florid, and we never get an accurate sense of the main character’s identity as half-Indian, half-Portuguese. The gravity with which Catholic excesses are delineated is excessive, with innocents too obviously pitched against zealots, and the underlining of common ties between religions could have been more subtle. Despite the research and seriousness of intent – or perhaps because of it -- Guardian of the Dawn is too ponderous by half.

Posted by Unknown at 9:34 PM No comments: 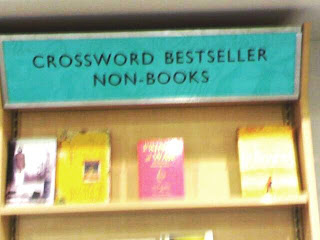 A bookstore at the new airport in Bangalore doesn't appear to think too highly of recent work by Messrs Mukherjee, Rushdie, Banker and Hosseini.
Posted by Unknown at 10:36 AM 2 comments:

This appeared in yesterday's DNA.

One of the things that can be said about graphic novels as opposed to their all-prose counterparts is that, by supplying images to the words, they leave the reader’s imagination with less work to do. Those who recognize this make it into a strength by inventive metaphors and devices – such as Art Spiegelman’s anthropomorphism in Maus, or Marjane Satrapi’s reinvention of the miniaturist’s art in .

In her debut, Kari, Amruta Patil employs no such stylistic bravura, relying instead on well-chosen words, low-key images and ironic observations to make her point. This is the story of Kari, whose lover, Ruth, leaves her to settle overseas. Kari, who arrives in Mumbai to take up employment as a copywriter in an advertising agency, acutely feels the stings and arrows of the outrageous city, which is a palpable presence in the book. It is “smog city”, a place of overflowing sewers, where “everyone guards their sanity against the grief of strangers”.

Patil effectively delineates Kari’s heartbreak, the shallowness of work and the loneliness of being lost in a crowd. She bonds as well as distances herself from her flatmates, and has some allies to lean upon: Angel, a cancer-stricken former agency client and Lazarus, her art director partner at the agency. She faces long commutes and water-logged auto-rickshaw rides, has ruminative seafood dinners at Soul Fry as well as an erotic encounter at Café Mondegar and endures advertising award shows. The action isn’t strictly linear: these are fragments, memories and slices of life that progress towards an increasing disillusionment with her present situation.

Patil’s writing style is appealing piquant, though her illustrations are, on the whole, more muted than striking. There are pleasing touches though, such as tips of the hat to Munch’s Scream and da Vinci’s The Last Supper. Overall, however, there’s clearly more of a reliance on the written word: the impact is less graphic and more novel.

The to-be-continued ending is inconclusive and hence unsatisfying, and the ongoing solipsism can be trying. Despite these inconsistencies, it must be said that Kari is an interesting and heart-felt debut and, one trusts, a harbinger of better things to come.