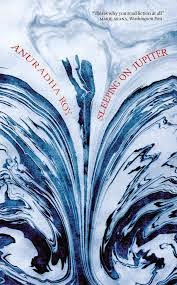 The experience of reading Sleeping on Jupiter is, for the most part, rich and immersive. Roy’s delineation of Jarmuli is as atmospheric as that of Ranikhet in her earlier The Folded Earth. In this town by the sea, incense mingles with the stench of rotting fish, scorching afternoons give way to mellow twilights, sunlight plays on water that carries ominous currents, cardamom and ginger are crushed into tea leaves at a stall by the beach, and the stairways and interiors of intricately carved temples witness a swarm of people, from visitors to locals, from the devout to the irreligious. This precise evocation of a sense of place, matched by an equally precise portrayal of interior states, all in unhurried, unshowy prose, makes Sleeping on Jupiter both accomplished and affecting.
Posted by Unknown at 8:18 AM No comments: