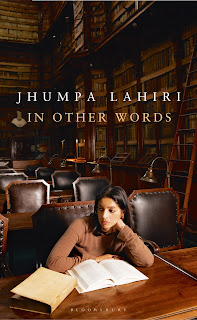 In Other Words comes across foremost as an act of self-exploration by a writer without a specific homeland, a search for a location triangulated by three languages. In Italian, she has “the freedom to be imperfect”, and this limitation of words and life, along with strategies to overcome them, are what she assiduously explores. Combining simplicity without shallowness and sensitivity without self-indulgence, it is written in the language of the heart.
Posted by Unknown at 8:44 AM No comments: