The pair is the primary creative unit, wrote Joshua Wolf Shenk recently in the New York Times. “At its heart, the creative process itself is about a push and pull between two entities, two cultures or traditions, or two people, or even a single person and the voice inside her head.” Many times, one half of the pair goes unacknowledged, especially in the case of writers and their wives. The obvious examples are those of Vera Nabokov, Nora Joyce and Zelda Fitzgerald; it’s only of late that their contributions have been paid attention to, with biographies and fictionalised accounts of their lives.

Two recent novels continue such revivification, both dealing with Ernest Hemingway’s better halves. Paula McLain’s The Paris Wife revolves around Hemingway’s first, Hadley Richardson, and their time in Paris, while Naomi Wood’s Mrs Hemingway encompasses all four of the writer’s wives. The former is more focused on the ways in which Hadley helped her husband flower as a writer, while the latter, with its decades-long span, also shows how the significant women in his life shaped him (and vice versa).

Much of the charm of The Paris Wife comes from its evocation of the city in which the 21-year-old Ernest and the 28-year-old Hadley lived during the 1920s: “filthy and gorgeous, full of rats and horse chestnut blossoms and poetry…The cafés of Montparnasse breathed them in and out, French painters and Russian dancers and American writers.” Here, Hemingway was to meet others who influenced him (notably Gertrude Stein), drink copiously, travel over Europe as a journalist and, of course, start work on the pared-down short stories and novels he was acclaimed for.

Hadley, meanwhile, “closer to a Victorian holdout than a flapper”, spent her days practising the piano, attempting French cooking and occasionally accompanying him on his jaunts. She’s clear about her role: “It was shockingly unmodern—and likely naïve, too—but I did believe any sacrifices and difficulties in our life were worth it for Ernest’s career.” By 1927, however, it all came to an end; they were divorced after Hemingway’s affair with Vogue journalist Pauline Pfieffer, who became his second wife.

McLain does provide emotional depth to historical facts, but overall, The Paris Wife could have done with less sentimentality and overstatement. Naomi Wood’s Mrs Hemingway is more ingenious and artful, both in structure and in telling. Set in the last weeks of each marriage, it circles back to first meetings and memories, like a hand of overlapping queens in a deck of cards, each one coming to terms with loss. Wood’s Hadley has more spirit, as do the other wives, especially Martha Gellhorn, war reporter and novelist, who at one point feels that Hemingway “is not so much greedy for women as blind to what he thinks he needs and so he grabs at everything. Wives and wives and wives…”

Hemingway’s small apartment above a sawmill in Paris is an important setting in both novels, and Mrs Hemingway also brings to life the other locations where his wives nourished and inspired him: the house in Key West, Florida; the one in FincaVigia, Cuba; and his final home in Sun Valley, Idaho. Here, Mary Welsh, his last wife, came to grips with his suicide and later, gathered together his posthumous papers. Among these was the manuscript for A Moveable Feast, his nostalgic account of 1920s Paris, thus bringing the saga full circle.

Reviewing two early biographies of Hemingway, Raymond Carver wrote that one grew weary of and ultimately saddened by Hemingway’s actions: “one display after another of mean-spiritedness and spite, of vulgar and shabby behavior”. That reaction, not unmixed with some sympathy, remains after reading these novels. The antidote, as Carver went on to suggest, is to re-read his fiction itself: “How clear, serene and solid the best work still seems”. The Paris Wife and Mrs Hemingway are necessary reminders of the women who enabled him to produce such work.
Posted by Unknown at 8:22 AM No comments:

Voices From The City

We bemoan the crumbling infrastructure of Indian cities, but there’s another substructure that we all depend upon, one that’s essential for us to go about our day-to-day lives with a semblance of normality. These are the cooks, drivers, security guards, maids and others who do their work behind the scenes so that we can do ours. Often, it’s only in their absence that we sense their worth.

Unsurprisingly, one doesn’t come across too many such characters in fiction from India written in English -- even though there are exceptions, such as those who populate Murzban Shroff’s story collection, Breathless in Mumbai and Balram, narrator of Aravind Adiga’sThe White Tiger. Now, as if to redress the balance, there are a great deal of them who crop up in Altaf Tyrewala’s short story collection,Engglishhh.

Many of these stories have previously appeared over the last few years in periodicals such as Caravan and Tehelka, but what holds most of them together – apart from a Mumbai setting -- is this attention to a class of people whose inner lives are often ignored, a trait that was evident in Tyrewala's debut novel as well. Here, for example, we track a harried maidservant during the course of a day in which nothing is more precious to her than a bottle of mineral water; eavesdrop on the thoughts of a building security guard obsessed with premonitions of death; and, in a maneuver similar to No God in Sight, come across linked vignettes of dashed hopes from the lives of a liftman, a security guard and other service staff in a large office building.

This is not to say that Tyrewala offers up turgid slabs of social realism that are hard to digest. There’s an undercurrent of light heartedness, almost cheekiness, in most that make them a pleasure to read, a large part of which is because of the use of demotic Mumbai rhythms. There is a satirical edge, too, chiefly to do with the behaviour of the middle class as well as others in thrall to their own hypocrisy, such as in the tale of the director of Indian porn. Similarly, the title story hilariously sends up a blind belief in numerology and its assumed advantages by creating a new form of English, one that’s “the most fortune-fetching and life-altering language in the history of the world”.

However, the longest story here, the extended saga of a multinational fast food company’s clown mascot who comes to life, is less than satisfying, not only because of the over-determined nature of the narrative but also because of its uneasy mix of broad-brush burlesque, realism and mockery. Constrictive plotting is to be found in other stories too, such as the tragicomic saga of a man who steals a cellphone to discover unpleasant truths close to home, but it works better here because of a more focused narrative zest.

In one of the stories in the collection, a son accompanying his father’s body in a hearse muses on “the advantage of living in an overpopulated nation: the individual experience could be made pedestrian in an instant by setting it against the collective.” In the acts of ventriloquism in Engglishhh -- “fictional dispatches from a hyperreal nation”, as the subtitle has it -- Tyrewala does the opposite: he plucks out pedestrian and not-so-pedestrian experiences from the collective and renders them unique.
Posted by Unknown at 11:29 AM No comments: 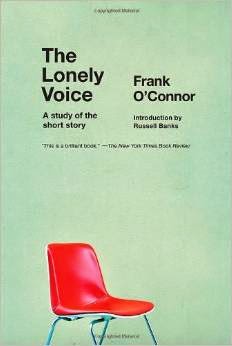 Parts of The Lonely Voice do come across as dated (he lauds Lawrence) or downright cussed (he’s less than charitable about Katherine Mansfield). One-size-fits-all theories can be Procrustean beds, especially for a form as protean as the short story, but there’s no denying that O’Connor provides a stimulating and always impassioned argument in favour of his own informed views.
Posted by Unknown at 8:46 AM No comments: