It's A Rich Man's World

This appeared in the latest issue of Time Out Mumbai

The fall of Lehman Brothers, the fraudulence of Enron, the subprime crisis: these and more have dominated recent headlines as well as our imaginations. Perhaps in no other time has so much notional wealth in the hands of so few meant downturns in the lives of so many. It’s this that Adam Haslett’s Union Atlantic takes as its subject.
Set in the early years of this decade, this is the tale of the Blackberry-wielding Doug, mid-thirties banker with Boston’s Union Atlantic Bank. A defalcation by a trader in Hong Kong, and Doug’s part in the ensuing scenario, leads to an unraveling of his carefully created life. The bank’s wily chairman apart, Doug also has to battle with Charlotte, retired teacher and campaigner against the large mansion Doug has erected.
The shadow of The Great Gatsby hangs heavy over the novel, and not just because of narcissism and casual amorality. There’s the lavish party – fireworks included – thrown by the bank’s chairman and his wife; at another point, a to-be lover creeps into Doug’s bedroom and is entranced by a wardrobe-full of shirts, suits and shoes.
Charlotte’s mental instability – she imagines her pet dogs talking to her, one Puritan, the other Black – reminds one of the troubled characters in Haslett’s earlier collection, You Are Not A Stranger Here. There is empathy in her portrayal as well as in those of other characters such as the Doug-besotted Nate and his stoner friends.
Haslett’s prose is both efficient and evocative, and he’s particularly good in capturing the alchemical properties of the world of finance: “… his churning mind turned lucid and through it power flowed as frictionless as money down a fibre-optic line, the resistance of the physical world reduced to the vanishing point.”
Because of these strengths, one tends to overlook the plot contrivance of Charlotte’s brother being head of the Federal Reserve and thus having to deal with Doug, too. This nuanced novel, then, is a worthy companion piece to recent non-fiction such as Michael Lewis’ The Big Short or Joseph Stieglitz’s Freefall.
Posted by Unknown at 6:45 PM No comments:

One could say of Roth's Portnoy's Complaint that it's “cheeky and bold, with a distinctly tart aftertaste". Of Roth's more recent novels such as Everyman, one could affirm that they're "late-harvest, yet not past their prime, with an acidic finish”. An extract from my Yahoo India column on why we ought to talk about books as though they were wine.
Posted by Unknown at 1:01 PM No comments: 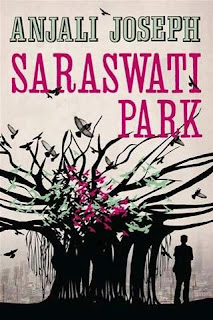 A letter-writer in his fifties rekindles his desire to write short stories. His wife leaves him to stay with her relatives and then is reconciled to his ways. And their nephew, studying in the last year of college, gains a measure of self-confidence after two gay relationships. That, more or less, is what happens in Anjali Joseph’s Saraswati Park.
Not the stuff of stirring drama then; yet the novel is, in its own way, a moving and finely-observed account of the lives of those who find themselves on the margins of Mumbai. Joseph’s eye for the minutiae of everyday life is unerring – details are not so much observed as they are massaged. In her hands, the quotidian is a many-splendoured thing, and this is what gives the book a rare quality of intimacy.
All three characters, living together in a house in “a new colony in a part of the city they hadn't really known existed”, are defined by dissatisfaction. The first, Mohan, the letter-writer who sits outside the GPO, buys second-hand books, symbolically scribbling on their margins. In his own way, he tries to weave the events of his present and past (his father’s own fledgling writing career, the streetwalker who comes to him to draft a letter) into short works of fiction. He is a person who, like Lambert Strether, should be told to “live all you can; it’s a mistake not to”.
His wife, Lakshmi, ekes out days of quiet desperation, frustrated by her husband’s hermetic habits. She acquires a taste for regressive TV serials; visits the neighbourhood temple; and mourns her elder brother. Ashish, their nephew, staying with them for a year while he finishes college, feels incomplete without a relationship to depend upon. At first, he falls for a “rich, thoughtless, overprivileged” classmate, then for an older, more urbane professor. All three characters, by the novel’s end, will gain a degree of fulfillment brought about by increasing self-knowledge. This is, one supposes, the point of naming their colony after the goddess of learning.
There is much in Joseph’s prose that is reminiscent of the work of Amit Chaudhuri. Yet, it is through employing a wry outsider’s gaze that she creates a style of her own. One of the pleasures of such defamiliarisation is that it shows us the things we take for granted in a new light. A long-distance bus is “an air-conditioned Hindi-film-music-playing torture chamber”; the Gateway of India is “a sort of three-dimensional gift tag…stuck on the city”; and street urchins playing football seem “to be engaged in a strange dance whose purpose was to cover every inch of the lane with the ball, which slipped between them as though attached to their feet by lengths of elastic”.
Such observations could be said to weaken the novel's fabric as they move away from the character's worlds and introduce, however unobtrusively, an author's viewpoint. Nonetheless, the dissonance between this outsider’s way of looking at things and an insider’s portrayal of objects and emotions give rise to Saraswati Park’s particular charms.
Sometimes, there is puckish, almost Narayanesque humour in the way the characters think of themselves. When Ashish’s friend reminds him of Gandhi’s saying that we have to be the change we want to see in the world, he thinks: “In that case, I’d have to be a very good-looking boy who’d sleep with anyone and make no fuss about it”.
Because of the novel’s meditative, unhurried procession of sentences, often supported by semi-colons, there are no overt highs and lows. Instead, life’s upsets, lover's quarrels, partings, and even a death are marked by a polite knocking on the doors of inwardness.
This can at times give Saraswati Park an overlong Sunday afternoon languidness. Yet, there are vivid images too, some involving pigeons and owls, others reminiscent of Imagist poetry. Gulmohar flowers, to offer one example, are “pasted like frail paper toys against the glistening wet macadam”. (Another unwitting echo of Amit Choudhuri; in The Immortals, he describes a Bandra lane filled with “precise carpets of bright red” gulmohur flowers.)
Saraswati Park, then, is a delicate and filigreed piece of work that can be read as a counter to the romanticism and grand narratives that populate so much of Indian writing in English these days.  At one point, Ashish thinks of his uncle as “…someone for whom each detail of life had its own significance, revelatory as though it had been a clue in a cosmic detective story”. That statement could well apply to the novel as a whole.
Posted by Unknown at 8:16 AM 2 comments:

Or, why more novelists ought to embrace mischievousness, black humour, invented lands and implausible metaphors: My next Yahoo! India column
Posted by Unknown at 12:16 PM 2 comments:

While awaiting The Masque of Africa, I dipped into Vivian Gornick's The Men in my Life, and was struck by how this passage captures perfectly the experience of reading V.S. Naipaul over time:

"To read Naipaul steadily is to experience something of the dilemma of an attraction that does not generate love. Three or four hundred pages of strong and original writing applied to a social critique that uniformly withholds sympathy leaves the reader both stimulated and unsatisfied. Inevitably, as the years pass, the experience grows less exciting; the lack of tenderness wears on the nerves."
Posted by Unknown at 11:54 AM No comments: