A sense of place is “one of the lesser angels that watch over the racing hand of fiction”, Eudora Welty wrote in a famous 1956 essay. “Location is the ground conductor of all the currents of emotion and belief and moral conviction that charge out from the story in its course”. It’s just such an angel that presides over Anuradha Roy’s second novel, The Folded Earth.
The hill station of Ranikhet is the backdrop against which she sets her characters, and it is one that defines and determines their actions. On almost every page, there are descriptions of the area’s seasons, wildlife, views, habitations, history, customs, architecture and more. This is done with a delicacy and empathy that belie the understanding and skill necessary to achieve them. One is reminded of Anita Desai’s Fire on the Mountain, similarly set in Kasauli.
As with Roy’s first novel, An Atlas of Impossible Longing, themes of loss, yearning and changing ties suffuse the book.  It’s narrated by Maya, a young woman from Hyderabad, who arrives in Ranikhet to take up a position as schoolteacher and get over a tragic bereavement. The years pass, and “though I cannot know precisely when it happened, a time had come when I became a hill-person who was only at peace when the earth rose and fell in waves like the sea”. She strikes up close relationships with Diwan Sahib, erstwhile minister of a royal family and now presiding over a decaying estate; Veer, the Diwan’s mysterious long-lost relative; and Charu, a young village girl.


The descriptions of the locale apart, another of the novel’s strengths is in its depiction of minor characters, be it the diwan’s factotum, Charu’s canny grandmother, her witless uncle, the school principal, the owner of a local garage and more. The portrait of the local administrator, though, is touched with caricature in his far-right tendencies and cartoonish attempts at writing and painting slogans for the good of the community (“Walk in Nature Zone, It is Health Prone”, for example.)
While not at school or helping the students make jams and jellies, Maya tries to assist the Diwan in completing a biography of Jim Corbett, speculating on occasion about his alleged possession of letters between Jawaharlal Nehru and Edwina Mountbatten. Meanwhile, Veer appears and disappears, busy with setting up a trekking agency, and Charu enters into a liaison with a cook at a new hotel. The deepening and shifting of intimacies, and the consequences that result, take place under the implacable gaze of the high Himalaya.
Other changes, too, affect everyday lives. Elections are nigh, and politicians of varying degrees of shiftiness seek to enforce their agendas. In addition, deforestation and construction leave scars on the idyllic landscape.
Roy’s sentences are graceful and unhurried, matching the pace of the novel. Some of the symbolism, though, is a tad overdone. Long-awaited showers put out a simmering forest fire as a couple finally consummate their relationship. Later on, a giant tree falls after a patriarch’s demise. Puzzlingly, the point of view strays away from the first-person on occasion, at times to detail Charu’s blossoming, pastoral love affair, at others to delve into the life of the buffoonish administrator.
Unfortunately, as the novel progresses, many of its narrative strands peter out. Be it Charu’s future, the threats against the missionary school or the outcome of the polls, they’re resolved in a matter-of-fact manner that robs the plot of vitality. Again, Maya’s relationships with the Diwan Sahib and with Veer are realigned in the finale through the abrupt tumbling out of hidden secrets, something that smacks of contrivance. Figuratively speaking, it isn’t Maya’s hand that brings about a resolution, but the author’s.
In its evocation of the permanent black of loneliness, and its rendition of the rhythms of life in a small town in the hills, The Folded Earth offers many rewards. It’s a pity that an organic unfurling of plot isn’t one of the novel’s strong suits.
(My review of Anuradha Roy's first novel is here.)
Posted by Unknown at 9:04 AM 1 comment:

Laughing At Big Brother In The Middle East 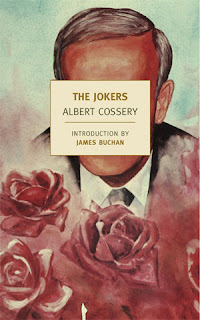 With the cries from Tahrir Square still being heard all over the world, Albert Cossery’s The Jokers is a tart reminder that there’s more than one way to skin a cat. Written in French in 1964, and now translated by Anna Moschovakis, this slim, elegant work deals with challenging a repressive regime through the weapons of derision and mockery. As such, it is suffused with irony and gleeful malice.
The Cairo-born Cossery moved to Paris after World War II, where he lived till his death in 2008. The Jokers, the fifth novel of the author who was referred to as the Voltaire of the Nile, is set in an unnamed Middle Eastern city, although James Buchan’s introduction specifically states that the setting is Alexandria.
In this city, a group of people come together to oppose the bug-eyed governor, a symbol of the administration, whose latest decree is that beggars be removed from the streets. For this new breed of revolutionaries, the governor and his ilk are “nothing but puppets pulled by strings, their words and gestures nothing but the grotesque convulsions of a buffoon”.
The four of them – a charismatic landowner, a louche man-about-town, a self-made businessman and a schoolteacher – come up with a plan to paste posters all over the city that praise the governor to such an extent that laughter would be the only possible response. Later, they write to the newspapers calling upon the public to donate money to be able to erect a large statue of the governor. This, then, is revolution via ridicule: a refusal to take corruption and venality seriously, to laugh in the face of Big Brother.
As a counterpoint, Cossery also depicts a more typical, violence-prone revolutionary, mocking his misplaced sense of pride and determination to engage with the authorities at all costs. The ringleader of the jokers, on the other hand, claims that he wants to let “tyrants lead the way and [be] even stupider than they are…they’ll have to prove themselves the greatest buffoons of all”. It’s a statement that brings to mind the actions of Jaroslav Hasek’s good soldier Švejk.
It’s not wonderfully entertaining all the way, though. At one point, the interiors of a casino are described as being reminiscent of “a Hindu tomb”. Indeed. While this may be a fault of the translation, a larger issue is the casual misogyny with which Cossery treats his female characters, and the fact that one of them, a daughter of the governor’s powerful ally, is shown to be a seductress manqué when she is merely “almost seventeen”.
For all that, The Jokers is memorable for its subversive satire that masks a deep-seated contempt for oppression and human vanity. It’s said of one of the book’s characters that “he delighted in the endless spectacle of man’s folly and, like a child at a circus, never failed to find life wildly entertaining”. Throw in a dash of disdain, and it’s a statement that could well be applied to the author himself.
Posted by Unknown at 8:09 AM No comments: