This review appeared in today's The Sunday Guardian 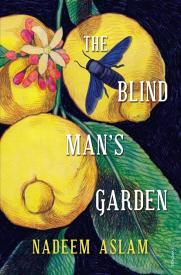 The fictional world of Nadeem Aslam’s The Blind Man’s Garden is one where a face is “a record of time’s weight on the soul”. Love is “the result of having caught a glimpse of another’s loneliness”. A character’s mind is a “black leaf-encumbered forest”. The landscape is “ripped to pieces by its own elemental energies”. And the sky is full of “quivering incidents of daybreak”.

Readers of Aslam’s earlier novels will be familiar with such quivering incidents of prose and he serves up large slabs of the same in his fourth. In theme and backdrop too, The Blind Man’s Garden is similar to his The Wasted Vigil, with noble and sometimes naïve individuals caught up in the maw of current events over which they have little control. Of a character in that earlier novel, Aslam wrote that her interest was “caught by personalities and events on the edges of wars, by lives that have yet to arrive at one of history’s conflicts, or those that have moved away from the conflagration.” In The Blind Man’s Garden, the conflagration and conflicts are closer home, something tersely and more obviously stated in the novel’s first sentence: “History is the third parent”.

This is largely the story of Mikal, who travels with his foster brother Jeo from Pakistan to Afghanistan shortly after the events of 9/11, ostensibly to tend to the war wounded there. Events take a cataclysmic turn, as they have a habit of doing in fiction, and Mikal faces a difficult journey home, having to deal with Taliban fighters, local Afghan warlords and American torture chambers. Along the way he manages to acquire a pet, a playful snow leopard cub. The force is strong with this one.

The novel also tells us of the fates of the ageing Rohan, Jeo’s father and former headmaster of a school that is now being used for more nefarious purposes than education; and of Naheed, Jeo’s wife, whose heart used to beat for Mikal before her wedding and who, in the absence of both of them, has to ward off an sinister, elderly suitor.While Mikal is battling through travails in Afghanistan, the others become embroiled in chaotic events to do with a school siege planned by a former armyman determined to show who’s boss.

Every now and again, Aslam introduces dramatic images, some surreal, some overly weighted by symbolism. Snares are set for birds on a tree in Rohan’s garden, a trap from which they try to extricate themselves by fluttering helplessly in the manner of his characters. At other times, a herd of horses emerges from underground, a fakir roams the streets clad only in chain links that represent the sins of supplicants, and a mysteriously-appearing ruby is used for ransom.

The heavy-handedness extends to the plot, with a series of all-too-neat coincidences and twists. Naheed loves Mikal but is carrying Jeo’s child; Jeo stumbles upon his wife’s secret by finding her letters in Mikal’s satchel; Rohan is instrumental is saving the life of another boy also named Jeo; Mikal kills two Americans, then redemptively saves a third.

After a while, one ceases to look upon these people as flesh-and-blood characters. They become both less than real and less than mythical, striding through strange worlds and seeking an elusive salvation that only love can provide. Scenes of brutality intersect with those of tenderness and there are also anguished paeans to do with the futility of extremism, in whatever form, in whichever country. Aslam’s heart is clearly in the right place; if only he hadn’t made every event excessively portentous, The Blind Man’s Garden would have been a more affecting depiction of what Atiq Rahimi in The Patience Stone, another novel set in Afghanistan, called “the mad world of men with notions of honour, pride and a woman's place.”
Posted by Unknown at 9:26 AM