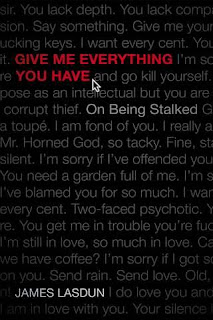 The Internet doesn't just extend our capabilities, it also amplifies our tendencies, for better or for worse. Trolls spring up at a moment’s notice, and incidents of online stalking are reported daily, as legal enforcement agencies scramble to catch up.

What does it feel like to be at the receiving end? In his new memoir, Give Me Everything You Have, novelist and poet James Lasdun recounts the anguish he went through when he was targeted online, how it affected his work and how he dealt with “the great fugue of hatred and malice that thundered over my life for the next several years”.

His story begins in 2003, when he was conducting a fiction writing workshop in New York, and was impressed by the work of one of his students, whom he calls Nasreen. “She was in her thirties, quiet and reserved”, working on a novel set in Tehran during the last days of the Shah. Two years later, he receives an e-mail from Nasreen to say that she’s completed a draft of her manuscript. Lasdun enters into a correspondence with her, during which he gives her the contact details of an agent and an editor. The e-mails continue, on both sides: the happily-married Lasdun writes that while hers were occasionally flirtatious, he kept “the playful tone alive without actually rising to the bait”, wanting to be more a mentor than anything else.

They meet once again, for coffee, and continue to e-mail. Given that Nasreen mails him several times a day, demanding more and more intimacy, sometimes incoherently, Lasdun tries to break off the correspondence. But, “though I didn’t quite know it yet, I had entered the realm of stricken enchantment in which technology and psychology overlap”.

In short, over the next few years, Nasreen sends him vicious, threatening e-mails daily, posts vile comments on his novels and behavior on Amazon, GoodReads and Facebook, communicates with the head of Lasdun’s college with wild allegations, and threatens and accuses his agent and editor, among others. Anti-Semitism is a standard feature of these attacks, as are accusations of plagiarism, racism, sleeping with his students and encouraging rape. Lasdun’s life falls apart; as he writes: “out there in cyberspace a larger, more vivid version of myself had been engendered and was rapidly (so I felt) supplanting me in the minds of other people: Nasreen’s version, the thief, the racist, the sexual predator”.


At this point, the memoir takes a series of detours as Lasdun tries to create resonances between his situation and other aspects of his life, including his relationship with his father. There’s an account of a long train journey and later, a trip to Jerusalem, which has the unfortunate effect of making the book devolve into a solipsistic travelogue. More interestingly, he finds parallels in literature: Gawain and the Green Knight, novels by Patricia Highsmith and I.B. Singer, Emily Dickinson’s letters and the New Mexico sojourn of D.H. Lawrence. Circling back to Nasreen, he writes of seeking legal counsel and talking to NYPD detectives, none of which has much effect.

From Lasdun’s account, it seems clear that Nasreen’s mental health is precarious, but this is something he pushes away: “however afflicted Nasreen may have been, she was obviously, calculatingly, tauntingly aware of the possible consequences of her actions, and by her own admission dead set on bringing at least some of them about (‘I will ruin him’).” Moreover, he candidly admits, his vested interest in wanting to think of her as sane lies in holding her responsible for her behaviour and to avoid discomfort in writing about her.

At the end of his book, there’s no closure: five years after they began, the online attacks continue “like fevers of a recurrent illness”. Give Me Everything You Have may be flawed, and of necessity one-sided, but it’s also harrowing. Before you befriend someone new on Facebook, think about Lasdun quoting George Eliot: “The last thing we learn in life is our effect on other people”.